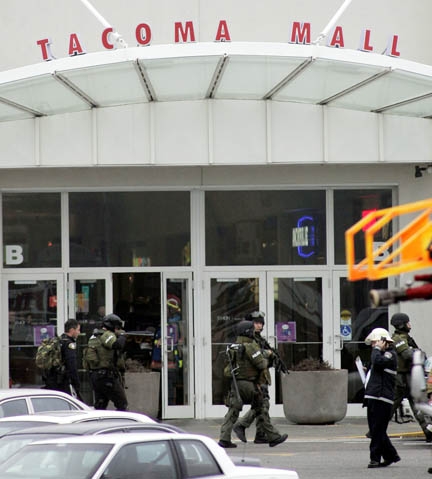 In McKown v. Simon Property, the Washington Supreme Court was asked to review the scope of a landowner’s responsibility for harm when strangers commit criminal acts against “business invitees” on business premises.

On November 20, 2005, Dominick S. Maldonado walked into the Tacoma Mall and opened fire on shoppers and mall employees, injuring seven people. Maldonado wore a dark trench coat concealing a rifle and a pistol, and carried a guitar case filled with ammunition. Brendan McKown, an employee at one of the retail stores, tried to stop Maldonado, but was shot and wounded. After shooting McKown, Maldonado took several hostages before finally surrendering to the police. At the time of the shooting, there were four unarmed security guards on duty and no security cameras. While the mall had an intercom system, it was inaudible and inaccessible on weekends, and the security guards were never trained to use it.

McKown brought a negligence action in state court against Simon Property Group Inc., alleging, that Simon failed to exercise reasonable care to protect him from foreseeable criminal harm. McNown presented evidence of six other prior shootings and three other gun-related incidents on the Tacoma Mall premises in the preceding 13 years.

The trial court dismissed McKnown’s claim and it went up on appeal. The Supreme Court noted that, as a general rule, a landowner does not owe a duty to protect others from the criminal acts of third parties. However, there is a recognized exception to this rule for “business invitees” (broadly defined as “a person entering commercial premises for the purpose of doing business”):

Since the possessor is not an insurer of the visitor's safety, he is ordinarily under no duty to exercise any care until he knows or has reason to know that the acts of the third person are occurring, or are about to occur. He may, however, know or have reason to know, from past experience, that there is a likelihood of conduct on the part of third persons in general which is likely to endanger the safety of the visitor, even though he has no reason to expect it on the part of any particular individual. If the place or character of his business, or his past experience, is such that he should reasonably anticipate careless or criminal conduct on the part of third persons, either generally or at some particular time, he may be under a duty to take precautions against it, and to provide a reasonably sufficient number of servants to afford a reasonable protection.

The Washington Supreme Court, reviewing the “similar acts” exception noted that, if a particular type of crime has occurred repeatedly on its premises in the recent past, a business may have reason to anticipate that such a crime will happen again. But, if the criminal act that injures the plaintiff is not sufficiently similar in nature and location to the prior act(s) of violence, sufficiently close in time to the act in question, and sufficiently numerous, then the act is likely unforeseeable as a matter of law under the prior similar incidents test and there could be no liability for the landowner.

If you have any questions regarding liability, please feel free to call Chris Thayer at (206) 805-1494 or e-mail him at CThayer@PivotalLawGroup.com.