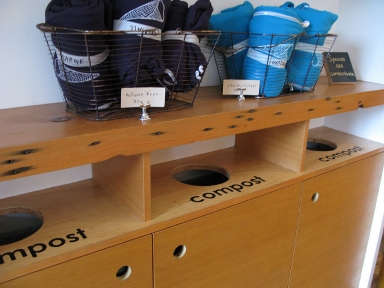 Seattle Municipal Code 21.36.083(B) bans food waste and compostable paper from garbage cans provided by the Seattle Public Utilities (SPU). Before Judge Andrus's ruling, it also required garbage collectors to determine by "visual inspection" whether these prohibited items made up more than 10% of a garbage can's contents. Violators are subject to fines.

Judge Andrus's ruling does not prohibit Seattle from banning food waste and compostable paper from SPU garbage cans. However, it "renders invalid the provisions of the ordinance and rule that authorize a warrantless search of residents' garbage cans when there is no applicable exception to the warrant requirement, such as the existence of prohibited items in plain view."

You can read more about this issue here, also linked below:

Photo Credit: No trash, only compost, used under the Creative Commons license.