Will Contests: How to Prove a Will Was the Product of Undue Influence 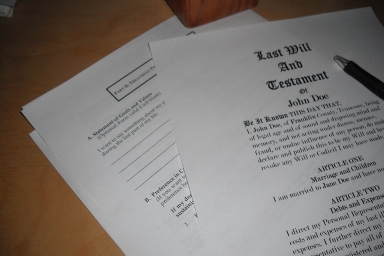 In general, people have a fundamental right to distribute their property however they choose in the event of their death. So, when a person executes a will in the manner required by law, that will is presumed valid and will be honored. But what if a person is concerned the will was the product of “undue influence”? What must that person show to prove it?

In the seminal case of Dean v. Jordan, 194 Wash. 661, 79 P.2d 331 (1938), the court identified certain suspicious facts and circumstances that could prove undue influence and convince a court to invalidate a will. The three most important factors are:

(2) The beneficiary actively participated in the preparation or procurement of the will. The participation must be more than simply driving the testator to meet with their attorney to change the will.

(3) The beneficiary received an unusually or unnaturally large part of the estate. Unusualness or unnaturalness can be measured by comparing the will to prior wills or other testamentary instructions (instructions meant to distribute property upon death).

Other factors to consider are: the age, health condition, and mental vigor of the testator, the nature or degree of relationship between the testator and beneficiary, the opportunity to exert undue influence, and the naturalness or unnaturalness of the will. A will is unnatural when it is contrary to what the testator would have been expected to do based on their known views, feelings, and intentions.

The burden of proving undue influence is high – it must be proved by “clear, cogent, and convincing” evidence, which is higher than the “preponderance of the evidence,” or greater than 50% likelihood, standard required for most civil cases. However, even though the standard is high, it does not require “direct” evidence, and may be shown through compelling circumstantial evidence.

In a recent case, In re Estate of Barnes, No. 91488-5 (January 28, 2016), the Washington Supreme Court analyzed a trial court’s finding that a beneficiary (Wells) exerted undue influence on the testator (Barnes) and upheld the trial court’s decision, based on the following findings of fact:

• Factor 1: Wells was Barnes’ attorney-in-fact when the will was signed and exercised that power of attorney to sign checks on behalf of Barnes.

• Factor 2: Wells not only drove Barnes to meet with her attorney, she did so on the heels of what the court called “Wells’ systematic manipulation of Barnes,” having alienated Barnes from her family and poisoned their relationship through repeated untrue statements to Barnes about her family.

• Other considerations: Barnes was elderly (nearly 95 when the will was executed) and vulnerable to undue influence due to physical limitations (having suffered two falls) and some cognitive impairment (probable early Alzheimer’s dementia). She was dependent on Wells as her sole caretaker, giving Wells ample opportunity to exert undue influence. Wells also struggled financially. After Wells became more involved in Barnes’ life, Barnes began writing checks to Wells and her family. And as her attorney-in-fact, Wells paid her own mortgage with a check from Barnes’ personal bank account within days of Barnes’ death.

The trial court cited as a “critical factor” in its decision the unnaturalness of Barnes giving her entire estate to Wells. Wells was not a relative, and had only come into Barnes’ life in the past few years. By contrast, she had living relatives who had grown up near Barnes, spent a significant amount of time on Barnes’ property, and shared important family events with her until the last few years – coinciding with Wells’ exertion of influence on Barnes’ life.

The Supreme Court noted that although these facts could have supported an alternative theory for upholding the will – that Barnes grew apart from her relatives and closer to Wells for valid reasons unaffected by undue influence – it was not the job of the appellate court to re-weigh the evidence as long as the trial court had sufficient evidence for its decision. The Supreme Court found there was sufficient evidence for the trial court to find Wells exerted undue influence on Barnes.

Although each case has a unique set of facts, the Barnes case helps guide how to apply the Dean factors and determine whether there was evidence of undue influence upon the making of a will.

Photo credit: Last Will and Testament, used under the Creative Commons license.