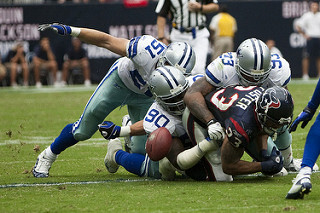 The NFL is currently facing serious allegations regarding the distribution of painkillers to NFL players. A group of more than 1,500 former NFL players and their families have filed a class action lawsuit against the NFL, alleging that all 32 NFL teams and their training staffs dispensed powerful painkillers to the players while also lying to the players about the serious health risks associated with the drugs.

The case was filed in May 2015 by 13 plaintiffs, including Dallas Cowboys Hall of Famer Mel Renfro and the widow of Minnesota Vikings player Chuck Evans, who died of heart failure in 2008.

This isn’t the first time the NFL has faced litigation from former players. A federal appeals court recently approved a settlement brought by 20,000 ex-players who contested the league was negligent in handling concussions.

The current suit is expected to garner a lot of attention with high profile former head coaches such as Don Shula (Miami Dolphins), Wayne Fontes (Detroit Lions) and Mike Holmgren (Green Bay Packers, Seattle Seahawks) being said to have threatened players with termination if they refused to take painkillers in order to play through the pain. The lawsuit is now set to enter into the discovery phase.

A federal judge ruled Friday that the NFL’s collective bargaining agreement does not prevent a group of former football players from seeking relief in U.S. District Court over injuries suffered from years of football-related drug use.

U.S. District Judge William Alsup denied the league’s motion to dismiss the class-action lawsuit. Alsup is the same judge who dismissed a similar suit in December 2014, saying then that the players’ claims were preempted by federal labor law and that the CBA between owners and players calls for other avenues for adjudication.

“It’s a historic decision to have a class-action case such as this overcome the NFL’s tried and true preemption argument,” Baltimore attorney Steven Silverman said. “They rely on the fact that there’s a collective bargaining agreement under labor law to avoid having to face the music in class-action suits by former players and to answer to allegations of wrong-doing.”