Distracted driving cited for spike in pedestrian deaths in 2016 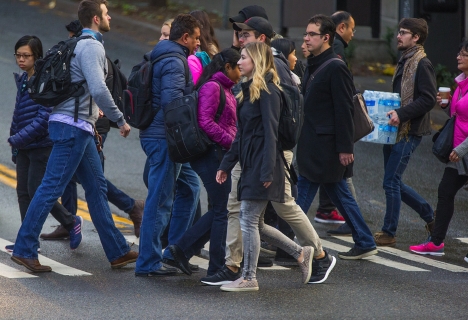 Increased driving due to an improved economy, lower gas prices and more walking for exercise and environmental factors are some of the likely reasons behind the estimated 11 percent spike in pedestrian fatalities in 2016. The figures were prepared for the Governors Highway Safety Association, which represents state highway safety offices.

But researchers say they think the biggest factor may be more drivers and walkers distracted by cellphones and other electronic devices, although that’s hard to confirm.

Walking and miles driven are up only a few percentage points, and are unlikely to account for most of the surge in pedestrian deaths, said Richard Retting, safety director for Sam Schwartz Transportation Consultants and the author of the report. Meanwhile, texting and use of wireless devices have exploded, he said.

“It’s the only factor that that seems to indicate a dramatic change in how people behave,” Retting said.

This new data comes out at the same time as two companion "distracted driving" bills are being considered by the Washington legislature, one of which we wrote about last month. The first, SB 5289, has passed the Senate and is currently in House Committee. The second, HB 1371, has passed the House and is currently on second reading by Rules Committee.