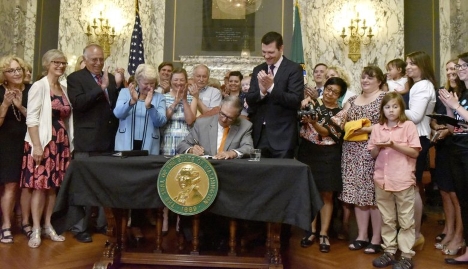 On Wednesday, Governor Jay Inslee signed into law a measure promising to cover workers' income when taking time off for the birth of a child. Washington will become the fifth state to offer such protections.

Washington's new law, which takes effect in 2020, is among the most generous of the five states' laws. It covers 12 weeks of guaranteed pay, plus two more for complicated pregnancies, and it allows low-wage workers to collect at least 90 percent of their weekly income.

“This is a revolutionary bill,” said Kristin Rowe-Finkbeiner, executive director of the advocacy group MomsRising, whose 40,000 Washington members spent a decade working for its passage. Late last month, the bill passed the state Senate 37-12 and the House 65-29.

While other states have appended family-leave laws to existing statutes covering temporary disability, Washington’s is the first to be built from scratch.

“It’s a real tip-of-the-arrow bill, a model that is going to break down the walls for other states. In that sense, this is a victory for families across America,” Rowe-Finkbeiner said.